This brief history came about through the efforts of Boy Scout Troop 360 Committee, Lancaster Township, and Butler County. It was first given by Sidney Shiever at a court of honor and then re-written with the help of his wife Joan and prepared for publication through the efforts of other family members. It holds significance for the family as their ancestors settled in this area in the 1800’s. Most of the historical material was found in an 1883 publication, “History of Butler County, PA,” by Waterman, Watkins & Co. 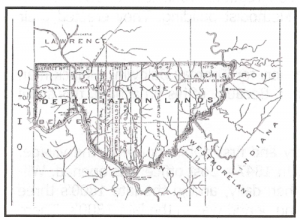 The white man first came to Lancaster Township in the 1780’s. Surveyors, Nicholson and Alexander, surveyed the area north of the Allegheny and Ohio Rivers. This was known as the Depreciation Lands. Soldiers of the Revolutionary War were given the title to 200-400 acre tracts, depending upon their rank and length of service. The reason for this: the state money or pay certificates were worthless, and federal paper was almost as valueless. These are the five surveying districts of the Depreciation Lands 1892.

Surveyors found Eli Scholar, a hunter and trapper; living in a small cabin near the head waters of a small stream, which is called Scholar’s Run today. The first settler was Henry Beighle, who settled on a farm in the eastern part of the township in 1796. Most of the early families came from Westmoreland County where they had resided for a few years before coming to Butler County.

There was a George Beighle who came soon after his brothers and settled near Middle Lancaster. When George Beighle was building his cabin, he left his work for a short time; when he returned he found a squatter had arrived and was busily engaged in completing a cabin which Mr. Beighle had begun. According to the frontier law, the man who cut the first timber was rightfully the settler. Mr. Beighle called a committee of three neighbors, who were acquainted with facts in the case, and a claim to settlement was decided in his favor. After the cabin was finished Indians from the Camp Run area came in the night and destroyed it.

The terrain in Lancaster Township was very broken and covered with forest and underbrush. This offered excellent cover for deer, wolves, wild cats, bears, wild turkeys, and abundant small game. The land, which these people cleared for a garden, and crops to feed their domestic animals, was probably not a larger area in the beginning than our lawns today. They used oxen for farm work. Since they had no wagons, their mode of travel was pack horses. Some children grew to maturity without ever seeing a wagon. They went barefoot except in mid-winter when they used moccasins or stoga shoes. They ate simple food and wore clothes much like the Indians. The citizens had little or no money to use. Most of these first settlers were of the German or Scotch-Irish descent.

At the heart of every growing community……… Our Churches

Lutheran Church – Membership society dates back to 1796. Services were held in the Beighles (Beighley) Log barn 1808-1820. Previous to 1820 a log building was built where the Stone Church now stands, holding both school and church services.

Stone Church – Replaced log building in 1829 this building (original) is over 183 years old. 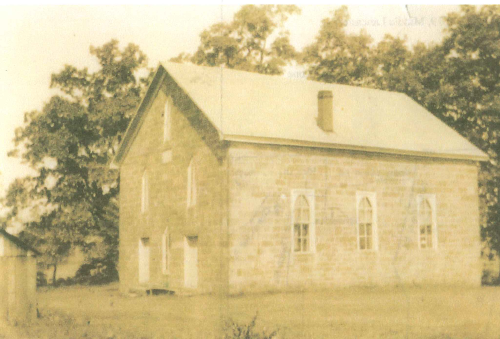 The church in the photo shows the Coal House in front.

Baldwin’s Church – Of the 1830’s Thomas Baldwin a black man and the owner of the town site, himself the preacher, had a regular membership and good attendance. There is no known photograph of Baldwin’s Church. 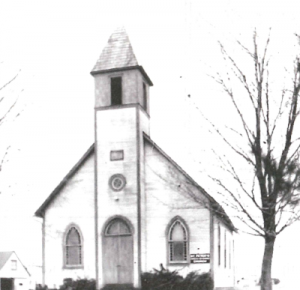 St. Peters German Reformed Church – In 1869 the word German was dropped from the name, then in 1934 they merged with Evangelical Synod, forming a new denomination, called the 1. St. Peters Evangelical and Reformed Church. There were two more name changes in 1961 changed to;

Methodist Episcopal Church – 1841-1856 In 1856 the society disintegrated and The Reformed Church used the building from 1856-1863 then it was used for a manufacturing business. 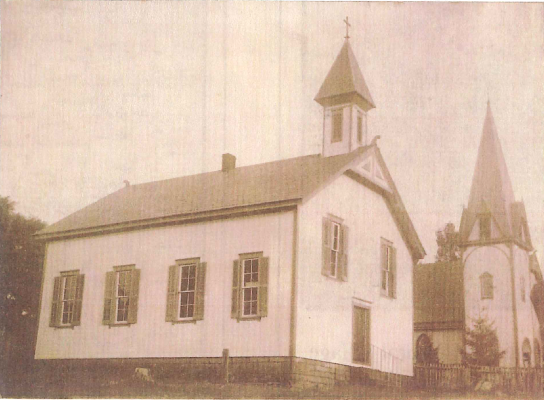 This photo shows both churches The English Lutheran, and The German Lutheran, as they stood then. Today the only thing left of the older church is the two stone pillars. 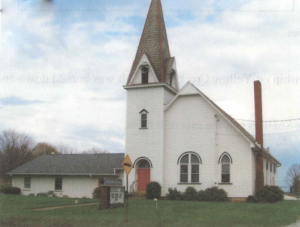 German Lutheran Church – 1840 it was wholly German for some years; then an English congregation was formed and the Church was then occupied by both congregations on alternate Sundays.

All three Churches in Lancaster Township have their own Cemeteries. St. John’s Stone Church is the oldest one in the Township.  Some of the older graves are veteran soldiers of the Revolutionary War, The War of 1812, and the Civil War.

The Methodist Church , it was where the parking lot is for the Grace Bible Church. This Cemetery was directly behind this church, (no known photographs exist for this church.)The driveways are still there today and that is all that separates the two of them.

Zion Lutheran Church has two cemeteries. The one that is directly beside the church is The Old German Cemetery (east side), the one across the street is The English Cemetery (west side, across from church). 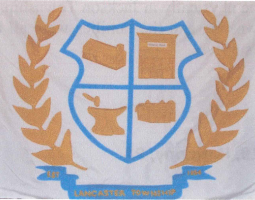 The color blue represents the sky, the color brown the soil and the design on either side represent growth. The Barn represents the hard working people who cleared the land. The hammer and anvil represent the blacksmith who with their hard labor kept the farmers moving ahead. The General Store a necessity for items people did not have any other way obtaining. And the long buildings represents the churches and schools for worship and education.